The funny thing about mathematics is that it has no vested interests. It has no friends. It is here to do its job, over and over again in an infinite loop. With or without you. If you can figure out what that is, you will learn, as I did, that the math will outlive you, outlive your time at your business, and outlive competitors who don’t understand math.

This is an idea worth sharing.

All start-ups and all businesses can be reduced to a mathematical core, which is an algebraic expression running in an infinite loop that outputs money. The expression is dead simple and looks something like this:

Where:
X: Cash received per transaction
Y: Cash paid out per transaction
A%: Prevailing interest rate of what capital or labor could get elsewhere for the same level of risk

If this equation is not true, the loop will shut down and your business will die sooner or later. It’s that simple.

These equations can be made to be incredibly complex, with hundreds of exceptions and special situations. But at their core, they are all about the difference between what you make, and how much you need to pay out. In the long run, whether a business exists or not, or how valuable it is, simply depends on its particular mathematical DNA. Zynga (Stock: ZNGA) is collapsing because the stock market has finally caught up to understand that the math in the business is hit-driven and volatile, meaning that X could disappear quickly. A few months ago when Facebook was trading around $30, I wrote a blog post arguing that it should really be valued at $15, and the stock market has caught up since then where FB is trading today around $20. Groupon is another mess – their accounting is so complex that for most people it is hard to understand what their equation looks like. And hence investors are spooked and running for the exits. All three of these businesses however are mathematically viable – meaning that X – Y > A% is true and their value > 0, hence they should exist. The differences between their value and price however is why their stocks are crashing. This is very similar to Fundamental Stock Analysis And DCF (Discounted Cash Flow) ideas used by long-term investors such as Warren Buffet.

The same approach can and should be applied to start-ups. Is this mathematically viable? And if so, can I repeat this in an infinite loop? This is the core. This is the most important question to ask. It’s not about new deals, Techcrunch hype, or the $10 million you just raised. None of that matters in the long-run. When I was running Peanut Labs, we had a healthy difference between X and Y on a per unit basis. Our margins were around 30-40%. The business was generating seven-figures in free cash flow per year pretty reliably. Several of our competitors chose to focus instead on growing big fast, with margins of 10 – 12%. Heck, there were companies that went from 0 to $100m in 2 years (top-line). Lets see what happened to them: Offerpal blew up, recapitalized and now exists as Tapjoy. Tapjoy has much better unit economics, and is now prospering under a new CEO who understands math better. SuperRewards was sold to Adknowledge, but the math caught up eventually and it died inside its new parent company. The original founder bought the business back at a big loss to the acquirer, and on a net basis, big money was lost. About 15 other competitors in the industry went out of business, had massive layoffs and lost capital. Peanut Labs’ core business in the meantime continues to work well on a per-unit basis (barring issues of over-staffing and new products failing). It is still valuable to its acquirer, and if managed well, will exist for many years to come. The mathematical core has out-lived me, out-lived changing industry trends, out-lived hype cycles.

Let’s look at another industry I know well: Car-sharing. When I looked at Zipcar, I saw that customers loved the service and revenue would likely keep going up, but it required too much ongoing investment to buy and maintain cars. I told Murti about a year ago, when ZIP was trading at nearly $15, that it was really worth only $6 (optimistically), and today ZIP is trading at $8. Getaround and Relay Rides both have poor unit economics where the amount of money made per transaction is too little (compared to the costs) to justify those businesses to exist. Whereas ZIPCAR is mathematically viable (albeit at a lower value), Getaround and RelayRides are not and will likely outright fail (unless they get lucky and sell to an idiotic acquirer). I hope they succeed and do well, I fear their management teams do not understand or respect the absolute power of math in their business. This was the problem with HiGear – we had to spend $3 for each $1 in profit we made – and hence we decided to exit that business even though customers loved it.

Can the equations of a business fundamentally change? Can long-term trends make something that is un-viable right now work a few years down the road? Yes and Yes. But that doesn’t change what the math says about your business today. I use the 40-hour experiment method to tell me if something is mathematically viable today, not 5 years from now.

“All businesses approximate to their core mathematical values in the long-run.” 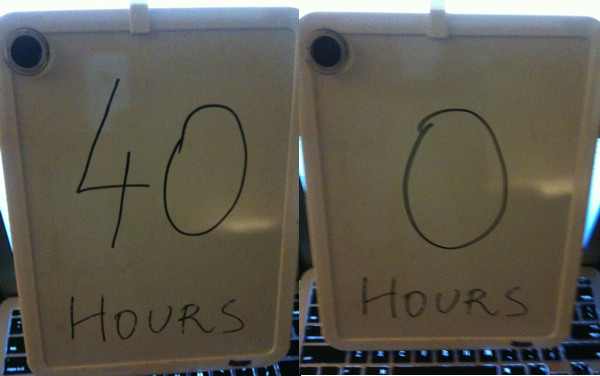 When I look at any business today – big or small – the first thing I do is reduce it to is mathematical DNA. The funny thing about math is that it has no vested interests. It has no friends. It is here to do its job, over and over again in an infinite loop. With or without you. If you can figure out what that is, you will learn, as I did, that the math will outlive you, outlive your time at your business, and outlive competitors who don’t understand math.

The math is your lightsaber. Use it as a crystal ball to see the future. Use it to build a business that will survive the future.

7 thoughts on “The Inevitability of Mathematics in Start-ups”